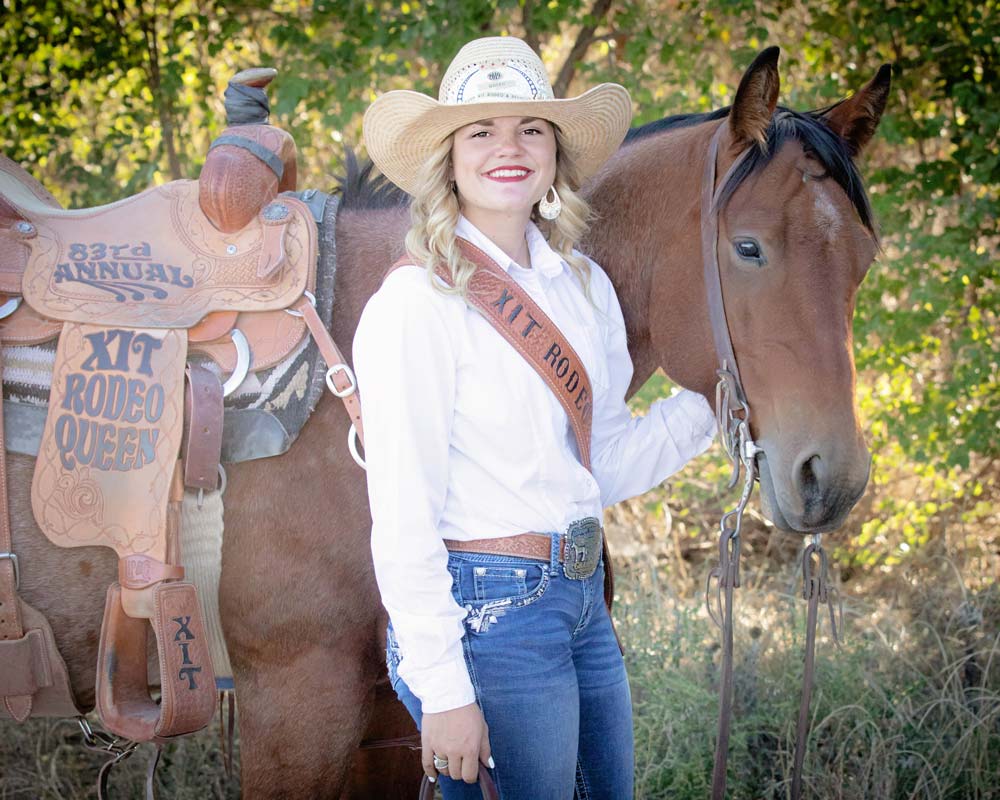 Kaylee Mitchell is the 17 year old daughter of Wally and Annie Mitchell and Kim Mitchell. She has two older brothers Tate and Jake, and a younger brother Kolt. Kaylee is currently a senior at Clayton High School. She is active in the Clayton FFA chapter serving as the Parliamentarian. She enjoys showing steers and horses and had the honor of serving Union County as their Fair Queen from 2018-2019. Kaylee has played basketball competitively since 3rd grade, where she is known for being rough and tough so the community nicknamed her “scrap-iron”. The past two years her basketball team has made it to the state tournament and she hopes to make it again her senior year. She was inducted into the National Honor Society in November of 2018 and is the current President. The National Honor Society is very active in the community, volunteering several hours a month to various organizations and events. Kaylee is very passionate about rodeo. Kaylee has been passionate about horses and the sport of rodeo ever since she was able to crawl on her pony Swampy. She’s been known to where her boots and spurs to school, basketball practice and games. Her basketball coach uses the nickname ‘country‘ for her because she showed up to various basketball activities in her boots and spurs on because she spent the morning working cattle. Kaylee’s freshman and sophomore year she rodeoed in the New Mexico High School circuit. She made it to the New Mexico State Finals rodeo in the reined cow horse and the breakaway roping. Her junior year she switched to the Texas High School Rodeo circuit, she really enjoys the level of competition in Texas. Kaylee made it to the Texas High School State Finals Rodeo in the breakaway roping and the reined cow horse. Kaylee is currently sitting number one in the breakaway for Texas Region 1 and is working hard to keep that spot and move on to the state finals in June. Being crowned the 2019 XIT Rodeo Queen was a dream come true for Kaylee. She has looked up to the past queens for as long as she can remember, waiting for the day she could run herself. She is extremely excited to carry on the traditions of the XIT Rodeo and hopes that other girls look up to her in the same way. Kaylee has two horses that she uses for XIT Queen events; 10 year old Cowgirl, and 7 year Lolita. Both of these mares were raised by her Dad. After high school, Kaylee plans to attend Eastern New Mexico University and major in Ag-Business while competing on the rodeo team. Kaylee aspires to be a good role model to younger girls everywhere. Her message to them is to never give up on their dreams because anything is possible.

Past Rodeo Queens of XIT